DanForce G1 Flashlight that Lit Up Kickstarter to Raise $400,000… 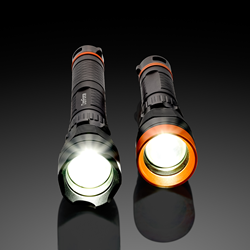 More than 4,200 crowdfunders lit up the Kickstarter campaign for the DanForce G1, investing over $400,000 to make the G1 the most-funded tactical flashlight in Kickstarter history, as crowdfunding continues for the world’s first modular, customizable flashlight that adapts to any lighting situation on Indiegogo InDemand.

“We appreciate the support of the Kickstarter community during our campaign, who confirmed the need for this versatile flashlight by making it the most-backed tactical flashlight in Kickstarter history…and the second-most funded flashlight in crowdfunding history, as well,” said DanForce founder Daniel Vizel. “The G1 puts the user to put really put the user in total control, whether it’s being used at a campsite or on your jobsite.”

The DanForce G1 provides the power to make night as bright as day to illuminate the darkest environment. The G1 features six separate modes of operation (high, medium, low, SOS and strobe mode), as well as an eco-mode when extended battery life is needed in challenging or emergency situations.